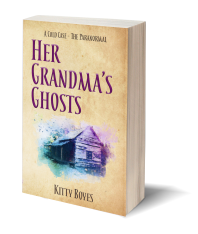 The truth was dead and buried – but had it been a lie?

The Jackman family return to live in Perth on Grandma’s property until their new home is built.

Moving into a haunted house is one thing, finding two buried bodies on the property, quite another.

Matt helps Hall take on a cold case where they try to unravel a dark mystery that becomes closer to home than they ever imagined.

Sinister discoveries in a wooden shack in the nearby bushland, stir up more than the ghosts that haunt and terrify them when they encounter another grave. And another.

The hauntings awaken Arina’s latent psychic abilities and the battle begins. Will they find out who the man in the shallow grave is and solve the mystery of his murder?

Is his murder linked to the skeletal remains of the two other bodies Arina found?

You Loved that Book. Right?

Imagine you’ve read a book you really liked and you want this author to keep writing so you can indulge again in a new story by this author. How could you encourage this? Read on…

Although the 65-year-old has always loved reading and writing, she never thought she’d one day write a book, let alone four.

But there is more to Her Grandma’s Ghosts than the usual murder mystery — the story ventures into the paranormal world where terrifying hauntings awaken latent psychic abilities.